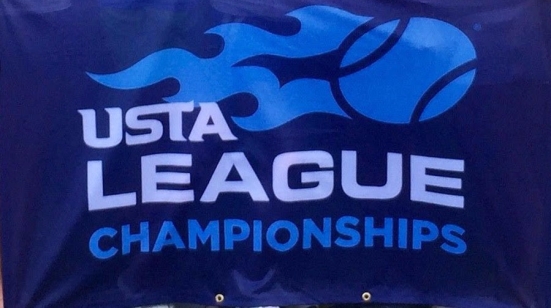 It’s not really about the tennis, you know.

Sure, it’s a healthy hobby over which one might exercise unhealthy obsession.  But, on a brilliant, sunny, August Sunday afternoon standing on a hill overlooking a court in Holyoke, Massachusetts, it wasn’t really about the tennis.

Six of us had finished with mixed results in the deciding USTA New England Championships match.  We were Connecticut, they were Rhode Island.  My partner and I dragged our hot, sweaty, aggravated bodies off the court after a humbling loss.  We knew our top singles player had done the same in an epic battle.  Disappointment in ourselves was soon replaced by hope when we discovered that two of our courts had won.

So, there we were, deadlocked with the Ocean State team who sat on that same hill, adjacent to us, no less invested than we in the remaining match.  The final doubles court would decide who took the title; which team would advance to National Championships.

What a surreal memory.  It’s gotta be about the tennis, right?

As a team, we all play in a 40 plus league, and too many of us are of an age to play in a 55 plus division.  We battle all winter in our local leagues and we are good.  So good, in fact, that I can’t remember a year in the last ten that we didn’t qualify for district championships.  The summer is a march through playoffs.  First one on the block: 55 plus.  We are young for that category, most of us still in our fifties, often facing opponents a decade older.  Suffice it to say, our mostly older competition took us to the woodshed with great satisfaction.

So, forty and over!  Surely, that’s our sweet spot, right? On a baking August weekend North of Boston, we failed spectacularly.

And of all the unlikely scenarios, the team on the hill, overlooking the courts of Mount Holyoke, could taste a National Championship bid in the ridiculously competitive 18 and over division.

We are a team of women of a certain age.  Our youngest player is 42 and our oldest past the 60-year marker. While locally we see few players younger than 30, when we get to playoffs the kiddos arrive like clowns out of that tiny car at the circus. It’s really only a smattering of youngsters, but when you are called for your match, and the unlined complexion of a lithe young lady stares you in the face and announces, “Good Luck and have fun,” you contain this scream…. “Seriously?”

I am 5’8 and the exterior of my 55-year-old body looks much the same as it has for the last 20 years. The interior, well…ouch.  That would be the ligaments in my right forearm and the interior tibialis of my left leg.  I no longer hop out bed.  Rather, I gingerly place my feet on the floor and brace myself for ankle stiffness. It takes the morning walk with my dog before I am sufficiently stretched to feel whole again.

My sometimes partner, Loretta, is 5’2” on her tallest day.  On the court, she is a tiger and plays like she’s 5’10”.  We drew a youngster on the playoff journey.  A darling 22-year-old named Charlotte.  Oh, she was lovely to look at; tall, lean and my first thought was, “What a sweetie.”  I wanted to wrap her in a maternal hug.

Charlotte, on the other hand, wanted to take my head off at the net with a topspin forehand driven with the kind of power my aging body could never generate.

It was all slow motion as she wound up on a sitter and it was obvious that the open court was of no interest to her.  The rocket came so fast that I actually ducked and her ball kissed the baseline. While I  recoiled myself from a matrix like escape from concussion, sweet Charlotte pumped her fist.  I leaned toward her and glared.  She looked at me as if to say, “Is there a problem?”  I pointed my racquet at her and said, “I am old enough to be your mother and that was not cool.”  Charlotte was nonplussed and just games later went after my partner with such force that Loretta’s racquet was knocked out of her hand.

Within seconds, my Lilliputian Loretta, eyes barely visible under her orange warrior headband, strutted to the baseline, looked up at me, leaned in and seethed, “There’s only one way to handle this kid.”   I looked down, hungry for some nugget of strategy that would neutralize girl wonder and Loretta spat out this, “We beat her &%$# ass.”

In victory, my petite partner jumped into my arms in a moment we are grateful was not caught on film

Listen carefully…  It’s hardly ever about the tennis.

Here’s what it’s really about:

It’s about the teammate who methodically took apart a 20-something singles player under the glaring sun on that August day in Holyoke.  She had to leave before the final was finished because she has two beautiful daughters and a baby boy, just into his second year of life, who was delivered months prematurely. He has fought mightily through the difficult first year.  Ben is well.  Lillian had to leave to get to her kids.  Her story inspires me.

It’s about our Captain, who still waits for her youngest of five to complete high school.  In the meantime, with none of the break that most of us hope to enjoy, devotes two days a week to the care of her first grandson.  She does it with enormous generosity and love.

It’s about finding friends late in life who, without tennis, we might never have met. It’s about what you learn about others in small drips because you carpool together to matches, or sit in hot tennis clubs on playoff weekends, sometimes for hours, waiting for your match to be called.  It’s about the glass of wine or beer you share after a match, sometimes in victory and sometimes in defeat. These are the places we learn each other’s stories.

It’s about feeling comfortable enough in a group that if you happen to burst into song or dance suddenly, one or more of them will join you.  We never let each other look foolish alone.

Here’s the thing:  When twenty women, all over forty, become a team they share so much more than tennis.  Not one of us hasn’t known struggle: illness, heartbreak, disappointment, grief.  We worry about our children.   If we are lucky, we have elderly parents who need us.  Not all of us do.  Some of us enjoy wonderful marriages, others lost that gamble and wonder if they are meant to walk this life alone.  None of us have a perfect life, but on that tennis court, and in that car, and sharing that drink, we find a place to work it all out.

Eight of us stood on that hill overlooking the courts at Mount Holyoke College on a hot August Sunday and poured all our energy toward our teammates who found themselves in a grueling 10-point match tiebreak.  They may have hoped, but couldn’t be certain, that their match would decide the New England Championship.  As spectators, we were collectively anxious.  When Karen and Jill pulled ahead to an 8-5 lead, we could taste victory.  All sitting stood up and held hands, as though our communion could will them to victory.  They lost the next two points, at which point I barked, “no more holding hands, everyone, back to your original positions!”  The team scurried and those who were sitting before sat again.  Hands were unclasped and our girls won the final two points.

While Rhode Island spectators slumped, we rose, and cheered, and hugged.  Several teammates ran down that hill to the court to give the news to Karen and Jill that their victory sealed the deal.  Our Captain beamed as though this were no surprise to her at all.

And so it was, an unlikely extension of an extraordinary season.

Seventeen of us will share an enormous house in Surprise, Arizona the second weekend of October.  We will spend time and treasure to compete at USTA National Championships representing New England.  It will be our pleasure.

Don’t be surprised if the National Championships ends up not really being about the tennis, at all.

5 thoughts on “My teammates and me…”