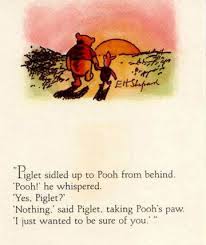 My friend Pat should get a byline in this blog.  She has given me almost as much fodder as Uncle Bobby.

This weekend’s prompt came via one of her standard phone calls,

“I don’t know if this is the right wording, and maybe you can do better, but I wonder if…..”

and she hesitates, and sighs, and gathers her thoughts;  the working of her brain almost visible to me across the bandwidth.

she fades a bit and finally,

“Do you know what I mean when I say ‘meaningful nothingness’?”

Meaningful nothingness!  Oh yes, my friend, I absolutely know and understand exactly what that perfectly imprecise and likely made-up term means.  I had it for 22 months and loved every meaningful nothing moment of it.

Meaningful nothingness for me was languid Sunday mornings, and quick dashes into Shoprite and awakening cups of coffee, handed to me as a schlumped around in sweats.  It was settling in to watch “Mister Roberts” on a winter Saturday afternoon just because the clicker found it on my television. Who can resist the dictatorial James Cagney making Henry Fonda’s shipboard life an exercise in frustration?  It was revisiting the New York Times crossword over a week just because maybe we can actually fill in every square, but not really caring if we could.

It was walking my labrador with him on snowy days, hot days, icy days and rainy days.

Meaningful Nothingness was the appearance of his acoustic guitar on Saturday mornings, played by him with mediocrity accompanied by my near pitch, often off rhythm voice, and who cared?  It was trotting off a lacrosse field in my referee stripes on a rainy night, just to see his face unexpectedly waiting for me in the stands.

“I didn’t know you were coming?”

to which he replied,

“I was on my way home and wanted to watch you do your thing.”

I miss meaningful nothingness now that he has gone and since Pat’s query about it, the concept has my rapt attention.  Perhaps, because I now understand just how elusive it is.  You can’t conjure it, or create it, or force it.  It is an organic thing that you wear like your most comfortable slippers.  For us, it was immediate, our comfort in meaningful nothingness.  I would contend that it is a rare symbiosis between two people that some will never experience.  I worry I will never know it again.

We did grand things in our time together, lots of wonderfully grand things.  A year and half later the details of those things are fading.  What is still vivid to me is the volume of meaningful  nothingness experiences we shared.

Walking to the library to return a book, folding laundry or making the bed together, reading books side by side, sharing a simple meal of couscous and vegetables on a Monday night meant more to me than any number of getaways we took or exciting moments at the US Open. A text in the middle of the day just to say he thought of me or sitting on his couch reading while he finished a workday at home. Fixing a tray of soup, crackers and ginger ale because he was sick were moments of true meaningful nothingness.

It was the reach of a hand that I  knew would respond with a hold, or the touch to the small of my back to steer me through a crowd.  It  was the knowledge that even when we were apart,  we were aware of the minutiae of each other’s schedule.  It was me quickly knowing the back stories and jobs of his colleagues, and him asking about the girls I coached by name. It was handing him a Tupperware container of leftovers on early Monday mornings as he headed to work.

Maybe it’s because no one else really sees those moments that make them so lasting in memory.   Perhaps the beauty of them is that they belong to just the two of us.  There are no value judgements in meaningful nothingness, no audience of well-wishers or stealthy underminers.  Moments of meaningful nothingness were only visible to the two of us and don’t necessarily register with anyone in the retelling of our tale.  You know when you have it and it’s a sacred gift.

We would say to each other in quiet moments of  meaningful nothingness,

“I would rather do nothing with you, than something grand with anyone else.”

Something changed for him and I can’t know what.  Meaningful nothingness shifted somehow to actual nothingness.  Shame, really.

Pat’s question about “meaningful nothingness” moved me this weekend to the sort of melancholy I have worked hard to put behind me. It’s okay, she reminds me, sometimes the best thing you can do is settle in and honor loss, attend to it, knowing that you will rise from it in your time.

It’s a bittersweet irony and part of me wishes that when Pat posed her question my response were more like this,

“I have no idea what you’re talking about”

But that would be a lie.