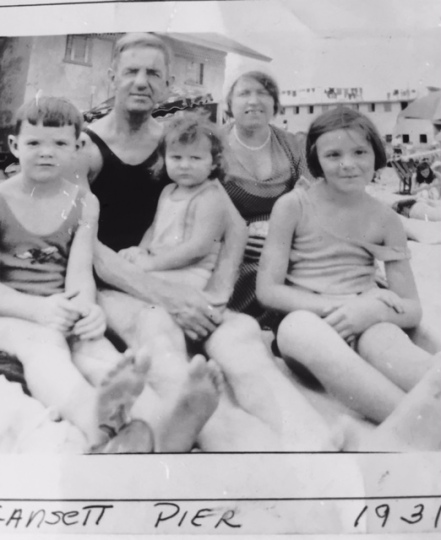 It has been a month since his death, and friends want to know what life is like for me in a “post-Uncle Bobby” world.

Well, the big stuff is behind me.  Funeral done, the attorney engaged, insurance claim forms filled out and his apartment cleared.   My garage is filled with the big stuff: a bed, chairs, tables, walker and boxes of clothes which will find their way to Goodwill. I held out a wonderful terry cloth bathrobe and flannel shirt to call my own.

The real treasures, however, are inside my home and they cannot be rushed.

What do I do now?

Often, I find myself sifting.

Sitting Indian style on my office floor reaching into boxes with the intent to discard, but instead minutes’ turn to hours and the save pile outperforms the throw away by a wild ratio.  They are too rich, these treasures he brought forward with him through 90 years.  These boxes in which I sift and lose myself inform me further the measure of the man.

Uncle Bobby was a sentimentalist.

There are pictures, so many, of a grandfather I never knew, but am finally coming to know.  Louis Barry died when Uncle Bobby was 14, my mother just 10.  He was handsome and tall and a man of letters, and writing…. reams of writing.  My grandfather was a storyteller with a devilish wit.

A letter, typed on the most delicate sheaf of yellowed paper to the Reverend Father Gilfillan dated December 19, 1938, extols the virtue of straight bourbon over whiskey or mixed drinks,

“Cocktails, a distant relation to both alcohol and whiskey, is ruinous to health and happiness, and mostly consumed by the idle rich, actors, actresses and the great writers.”

How about the warts?  All is quiet in Providence.  Mama, Rita and Louise went to Narragansett Pier today, while I worked.  What is going on at camp?  Are you broke?  Miss you and will send some dough when I can.”

When Uncle Bobby received that letter he was only 12 years old, at the camp in Matunuck, RI that he spoke about wistfully to me 78 years later.  Imagine, “Daddy” taking time for his boy on a hot July day.  I think I would have loved my Grandfather.  He was a sentimentalist, too.

Two years later, there is a note card from Bobby written in cursive,

I suppose you are waiting for this letter I am sending you.  I suppose you want to know what I do down here and how I like it.”

Uncle Bobby was an anvil even then, dragging himself through the sand with a piece of taffy.  I read and want to say to this 12-year-old boy – “get on with it, already!”

He does in his own time,

” I made friends with the Hunt brothers.  I must say they are the funniest two boys I have ever known.  We went, as we call it, ‘bumming’, and but no luck and had to walk from Bonnet Shores to Wakefield.  I got quite a sunburn on my legs.”

“Bumming” would in due course be called hitchhiking, a little mid-century political correction at play.  12-year-old boys hitchhiking and reporting it to their parents?  There is a beautiful innocence to that.

He closes with this,

“Please come down to see me on Sunday.  I would be glad of it.”

Can you imagine Louis and Mary Barry sharing that letter at the dinner table on Kingston Avenue on a steamy July night?  I imagine my blue-eyed, curly dark haired eight-year-old mother hanging on every word of her big brother’s escapades.

Two years later, Louis would pass away. How Uncle Bobby’s heart must have ached at that loss.

The treasures are bottomless.  There are his sisters report cards from Saint Sebastian’s School.  My Aunt Rita was a crackerjack student, and my mom?   Well, she was a little like me and it turns out my daughter; excelled at what she loved (History, English), and struggled at what disinterested her (Math and Science).  This is new information for me.  I assumed my mother was a scholar. I should have known her patience with me as a student was less virtue than empathy.

As I winnow, I open a delicate envelope with a return address from the Bristol, RI Superintendent of Schools.  Uncle Bobby was a lifelong teacher, and I had no idea he had taught anywhere but Pawtucket.  My heart lurches a bit as I read that this Superintendent was not renewing his contract due to unsatisfactory performance.  It was his tenure year and my sweet, sensitive Uncle Bobby was sent packing.

Who saves that sort of rejection?  It was written in 1966 and was still in his possession some 49 years later.  I would have torn it up on the spot, sunk it to the bottom of a river, or burned it.  A letter like that would be destroyed so as not to give it the power to nick at my self-esteem.

Uncle Bobby was smarter than I;  wiser by furloughs.  That letter, co-mingled with letters of love, is a reminder that humility keeps us grounded.  Failures do not define us, but inform us going forward.

A lesson from beyond the grave, I suppose.

The remainder of his treasures await me for another day.

Sifting through the treasures; uncovering the lessons he left for me.